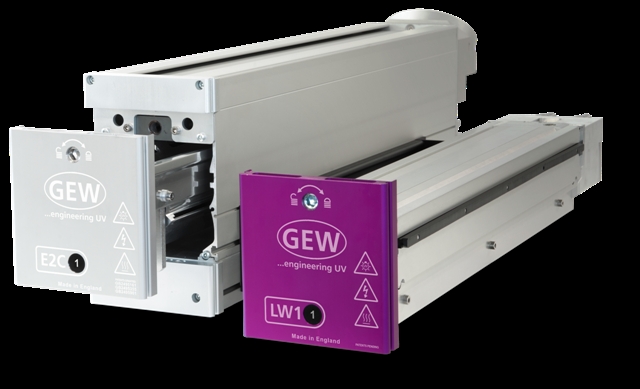 Embracing new developments and technologies, MPS prepares its printing presses for the future of LED with the integration of the new GEW hybrid LED UV system, to be exclusively unveiled at Labelexpo Europe 2015.

MPS is the first narrow web press manufacturer to show the new GEW hybrid LED UV system (ArcLED), integrated with the next generation EF Neo flexo printing press. Labelexpo Europe visitors interested in LED curing can visit the MPS stand 11C20 to see live demonstrations, where MPS will show both LED and arc UV curing in combination with low migration inks of the Flint Group for label and film applications. With this combination, the MPS press will run at high speed using less energy, for the same running capacity.

Due to the high intensity of UVA illumination with LED, heavy ink layers are cured more consistently with improved adhesion.
MPS technical director Bert van den Brink comments: "The main difference and biggest advantage of this showcased GEW ArcLED curing system, compared to other LED systems, is the ability to combine and interchange conventional arc lamps with LED curing at every print station. This hybrid system also provides MPS customers the flexibility to upgrade to LED at a later stage, so they can fully utilize the advantages of both technologies without the need to re-invest or modify their press."

What also makes this hybrid UV curing system advantageous for our customers is the opportunity to move towards LED curing without the risk of being locked into the technology on the entire press. We recognize that further LED developments are underway, and the total ink portfolio needed for certain print jobs is not yet available in LED curing. However, the industry (including MPS) recognizes the developments in the field of LED will evolve rapidly, just like the change of infrared to UV. With the GEW hybrid LED UV system, MPS offers customers the ability to prepare for LED evolvements with a practical and cost-efficient solution."

With the new GEW ArcLED curing system, the same lamphead casing is used with interchangeable pull-out cassettes for arc and LED, including the same power supply and control. The associated RHINO-ArcLED power supply automatically recognises the type of cassette being used and adapts all parameters accordingly, including the correct power type and running parameters.

According to Marcus Greenbrook, International Sales Manager at GEW, "Our new LED UV curing system is compatible with the widest range of substrates, and it increases machine uptime because of less maintenance. It also reduces energy consumption, as with LED instant on-off switching means no energy is consumed when the printing machine is idle between jobs.

Labelexpo Europe visitors interested in more information about the new GEW ArcLED system are invited to visit MPS in stand 11C20, or GEW in stand 6C18.