While obvious examples of gratuitous packaging are always guaranteed to elicit the outrage of a tabloid headline, an increasingly informed understanding of what really constitutes waste should transform the general perception of the industry as a force for good, reports Sam Cole

Easter's coming up, so it would be naive to imagine that for all the seasonal confectionery that'll be enjoyed - over 80 million hollow eggs in the UK alone, and arguably trillions worldwide - there'll be the usual complaints of style over substance; the implication being that consumers are being unfairly coerced into shelling out cash they can ill afford on mostly thin air and fancy packaging.

It might not be such an unreasonable criticism on face value were it not for its disregard of the part played by outer packaging in boosting the pleasure to be gained from an inner content; the point of difference between gifting rather than supplying. The UK accounts for the world's seventh highest annual consumption of chocolate, of which Easter eggs account for 10% - making it a £200 milion market.

Packaging as compensation, maybe; but even if its primary purpose is to protect a profi table revenue stream rather than a product's life expectancy, its contribution to a healthier economy is still clearly evident.

Perhaps it is its multi-functional seen but not heard capability that makes the sometimes opaque role(s) played by packaging so equally less obvious for the general public to label, and the benefits derived to be so often taken for granted. Meanwhile, it's a skewed set of misconceptions that often best serve the commercial interests of the rest of the supply chain; for example, the not immediately apparent benefit accruing via a 'wasteful' 2gm of film to the viability of a cucumber acting as a handy target for diverting potential fl ak away from other aspects of the retail model.

The macro-downside to making inadequate provision for the maintenance of fresh produce on a global scale, however, is more accurately defining perceptions of comparative waste. According to the UN's Food & Agriculture Organisation (FAO), approximately one-third of all of the food produced annually for human consumption is either lost or wasted. That's over 1.3 billion tonnes of food gone begging in a world within which 13% of the population is hungry on a daily basis, and one person dies of malnutrition every four seconds.

Quite often it's food that's needlessly squandered; either discarded unwrapped, or else left to rot on the ground without ever having been processed or properly harvested. It's reckoned that North American households habitually dump the equivalent of a day's worth of all the food they purchase each week; adding up to $600 per annum per household for a family of four. The UK behaves just as irresponsibly, consigning more than 18 million tonnes of edible food to landfill each year at a cost of as much as £400 per household.

While that's shameful enough, arguably even more dispiriting is the received wisdom that as much as 50% of all crops grown in developing countries never manage the transition from farm to fork - due either to ineffi cient agricultural practice or else deficiencies within the supply chain.

Once harvested or processed, of course, then packaging materials manufacturers are making an increasingly competent contribution towards the elimination of unnecessary waste through the application of barrier and breathable fi lm solutions to extend product life and freshness; for example, continuing advances in extending the capability of polyamide film via the development of speciality resins for both barrier and breathable conventional film grades such as DSM's polyamide nylon (PA6) Akulon and Arnitel, respectively.

As well as providing optimum barrier protection against oxygen - making it especially appropriate for the packaging of freshly produced meat, fish and cheese - polyamide is puncture resistant in co-extruded or laminated multi-layer film structures. These are key attributes in maintaining product freshness; ensuring greater protection during transit; and prolonging its life on-shelf and post-purchase. A further differentiation afforded is its ability to maintain a consistent level of barrier protection regardless of variations in temperature.

While manufacturers are increasingly seizing the initiative, governmental and NGO bodies are still often lagging behind in recognition of the proactive role that packaging is positioned to play in reversing levels of unnecessary food waste. For example, the recently announced: 'foodprint reduction' campaign backed by the FAO and WRAP among others while aiming to reduce the 1.3 bllion tonnes of food lost each year dramatically, fails to include packaging technology as a means to achieving this end.

In acknowledging that packaging prolongs product life and especially that of fresh produce, by the same token there is a growing awareness throughout the supply chain at least that it is in itself a resource too valuable to be used only once and then wastefully discarded.

An analysis of offi cial EU data on packaging waste recently published under the aegis of the European Organisation for Packaging and the Environment (EUROPEN) indicates that the volume of used packaging sent for fi nal disposal declined to just under 18.7 million tonnes by 2010; this despite a 17.5% per capita increase in household consumption expenditure on food and non-alcoholic drinks over the same 12-year study period. Meanwhile, an estimated two-thirds of all packaging materials were recycled. To set these stats further in context, EUROPEN notes that an estimated 89 million tonnes of food was wasted across the 27 EU states in 2006 alone.

While there are any number of co-ordinated nationwide recovery infrastructure options in place for most materials, the generating of energy from waste represents the main alternative to landfill for disposing of used flexible packaging; unless, of course, it's derived from a bio-based material that fully composts, such as Italian-based Novamont's Mater Bi, whose annual production capacity in excess of 100,000 tonnes has largely underpinned domestic legislation aimed at resolving waste issues specific to single-trip supermarket plastics bags by substituting over 25 billion of them with a compostable alternative.

It's a solution that has been closely observed by a number of other EU member states including Germany, Spain, Norway and Ireland, where fiscal controls have significantly reduced the use of conventional HDPE bags.

Other countries have substituted oil-based plastics with the so-called oxo-biodegradable variant: basically, conventional PE pre-treated by an additive that ultimately causes the film to disintegrate into small particles (but not to compost) after a period of time.

While all of the currently available options have their supporters and their critics, their often inherently conflicting properties once exposed to the existing waste stream can hinder rather than facilitate prospects of useful and usable recovery. According to Dr Thomas Probst of the BSVE, Germany's Federal Association for Secondary Raw Materials and Waste Management, mixing PLA or other starch-based bioplastics within an otherwise conventional plastics populated waste stream can create insurmountable difficulties for recycling.

"If you're processing some of these plastics and you're going through hot washing, then they can dissolve, thereby leaving a film on the normal plastics, which when they're processed will then develop hot-spots which severely limit their forward application because they're effectively spoiled," says Probst.

"Also, the water used for the hot washing has to be cleaned more intensively or changed more frequently because micro-organisms find perfect conditions in water to grow, if they're containing PLA or corn or sugar parts; this is another major problem."

Hitherto, the onus of responsibility for packaging (and thereby, waste) reduction has been largely centred upon producers and has achieved commendable success. In the UK, for example, according to DEFRA two-thirds out of around 10.8 million tonnes of all packaging waste were successfully recovered during 2010. Twelve years previously it was a mere 27%. Those targets increase annually and will be closer to three-quarters by 2017.

In the meantime, however, pressure is building for the load to be shared by other elements within the supply chain; not least consumers themselves. To some extent this is already happening; there has been a 235% increase in household waste recycling over the past decade, undoubtedly accelerated by the introduction of materials separation and sorting guidelines within the past three years.

The prevailing consumer mindset within the developed West - and the UK in particular - is still a long way behind that of, say, Japan, where the dependence upon and invariably high cost of imported materials has inculcated a collective determination to optimise resource. This deep-seated resistance towards unnecessary consumption further extends into a collective willingness across the entire supply chain to recycle or reuse (including energy from waste), with producers making it as easy as possible for consumers to do so.

For example, there is an industry-wide agreement not to use coloured PET (hence a thriving shrink sleeve market); a preference for labels that are easier than the norm to peel off; a glut of refill packs, invariably two or three-layer co-extruded flexible pouches. These increasingly tend to optimise the natural properties of the material itself. 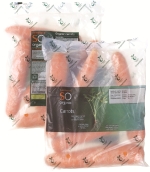